Apparently, grape harvesting is not an autumn thing, in some parts of the world grapes are harvested past the traditional harvest season has ended to obtain the sweet nectar which we call as Ice wine. It is certainly a wine treasure because ice wines are only made in countries with suitable winter temperature.

Keep scrolling to find out more about its origin, how it is made and more.

Ice wine? You mean the one that’s been frozen? 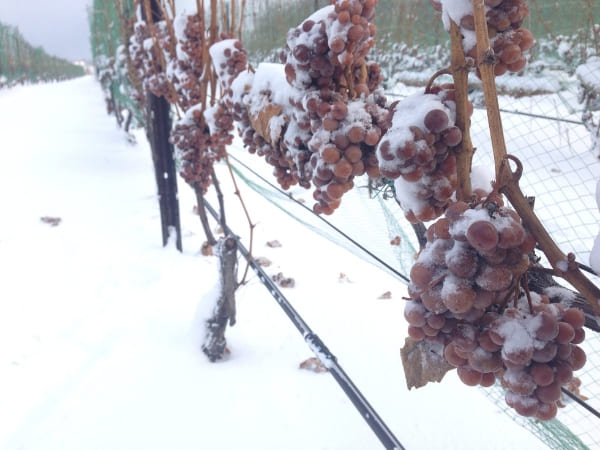 Well, not really, that can be a bit misleading, as ice wine is a type of late-harvest wine which is made from grapes that were left to freeze naturally on the vine or they were left on the vine past the typical growing season. Since this is a delicate process, the goal is to pick the grapes exactly when the right temperatures hit, which is usually in early December or in late February. Ice wine is made from the extraordinary liquid of snow-covered grapes.

Who are the legends of ice wine?

Taking it back to 1794 where German winemakers on an extremely cold winter pressed the frozen grapes that were left on the vines. Obtained was the first Eiswein with very high sugar content accompanied with great flavor. Production of such a wine later arrived in Canada in the 1980s and eventually became an Ontario treasure. Ontario vintners started producing ice wine, particularly on the Niagara Peninsula. Germany and Canada lead the production of ice wine although it is now produced across the globe like Australia, Austria, Denmark, New York, etc.

Breaking it down- how is it made?

It starts with netting the grape vines to protect them from being devoured by hungry birds, wild boar, and other beasts as they love the taste of the sweet berries as they ripen. Frozen grapes are processed at around -7 degree Celsius or 19 degree Fahrenheit. While still frozen, the harvested grapes are pressed; the resulting liquid has high concentrations of sugar and undiluted acid, with most of the water leaving behind as ice. As the water inside the grapes freezes faster while sugar, acid and other solids do not, an even more highly concentrated and sweet wine is obtained. Fermentation of ice wine can take anywhere from 3–6 months, which is generally conducted at a lower temperature to keep the freshness of the grapes' fruit intact for the characteristic complexities of Ice wine. If the process is executed correctly and at the right moment the result is the intensely flavored, luscious, and highly sought-after Ice wine, striking an exquisite balance between acidity and sweetness, which is generally not found in dessert wines. On average, only about 10 to 20 percent of the original crop actually ends up as ice wine. 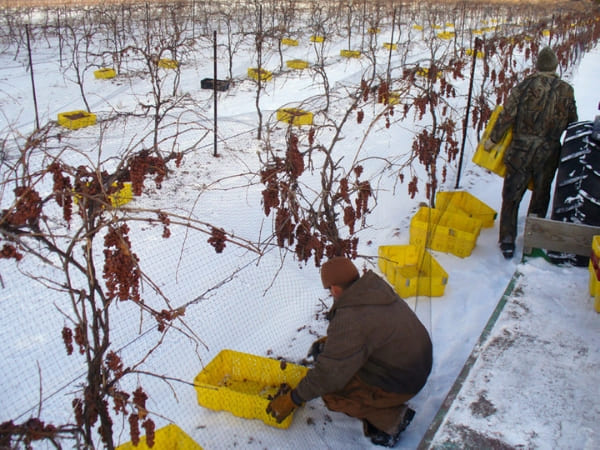 The whole process from harvest to press takes around six hours or more and must be done when the weather conditions are apt, it can be risky as in some years as grapes might not freeze at all.  Due to unpredictable weather patterns, harvesting is done in the chilly midnight or early hours of the morning. Harvesting requires a large workforce enough to pluck the entire crop in just a matter of a few short hours. Ontario and British Columbia have the best climates for reliable production 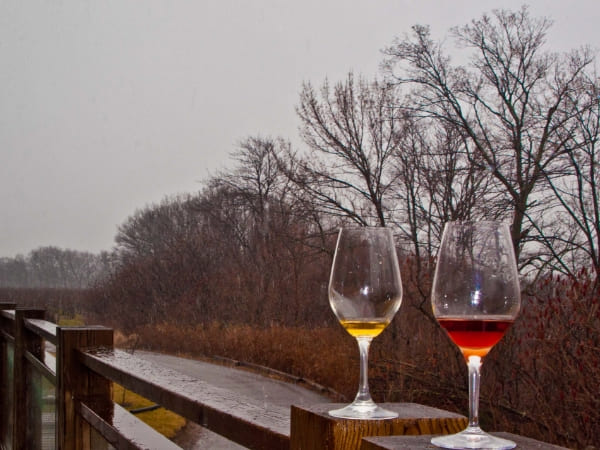 Ice wines are delicate and light with concentrated flavors, each varietal has its own character. All the varietals are sweet with a firm backbone of acidity, hitting the perfect balance for the palate.  Ice wine made from red grapes are light-burgundy in color and tends to sweeter similar to the taste of candies and berries. Ice wine made from white grapes is light gold in color with a taste similar to peach. White wine is more full-bodied than red wine.

What grapes are used in ice wine?

Traditionally it was made from Riesling grapes. Best red ice wines are made from Cabernet Franc and Merlot grapes, while Vidal (hybrid grape variety) is the most popular white grape varietal for Canadian Ice wine. Chardonnay, Malbec, Chenin Blanc, Pinot Gris, or Sauvignon Blanc are also used. 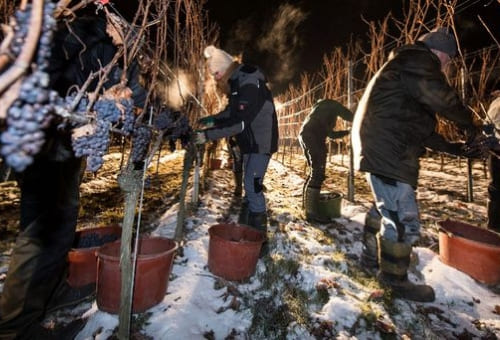 Ice wine making involves a combination of government regulations, large workforce, and risk which makes it difficult to find it at a cheap price. Depending on the weather there can be years where there is no frost at all leading the grapes to rot or otherwise lost. This also means its production is restricted to certain countries where the climate is freezing and frosts are guaranteed. 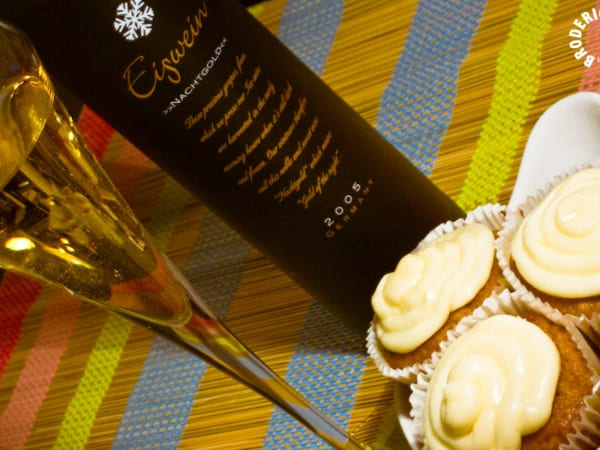 Make sure to chill your ice wine first to 10-degree Celcius. Use a chilled tulip shaped ice wine glass which reflects the gold color of the wine. It is after all a dessert wine and should be served with dessert. Since it has dominating fruity flavors like pineapple, papaya enjoy drinking it with chocolate mousse, ice cream or cheesecake. Use the thumb rule of not pairing it with food that is sweeter than the ice wine itself. Being a super sweet wine, it can also be paired with foods having high-fat content like a platter of cheese, pork, beef, sausages, etc.