The roots of the El Transito winemaking tradition stretch back to the end of the nineteenth century when the current owner\'s great grandfather, Pietro Marini, emigrated from Italy and settled in Cafayate.  The tradition has been handed down and is now in its fourth generation, in the very capable hands of vintner Andrés Nanni.

At the 3rd annual Sommeliers Choice Awards, which took place in San Francisco this May, Pedro Moises won a Silver medal, which is one of the top seal of approvals in the on-premise industry where wines are reviewed by on-premise buyers and experts for the on-premise market.

The Pedro Moises score was based on: Food Parability, Typicity, Quality, Value, and Packaging. 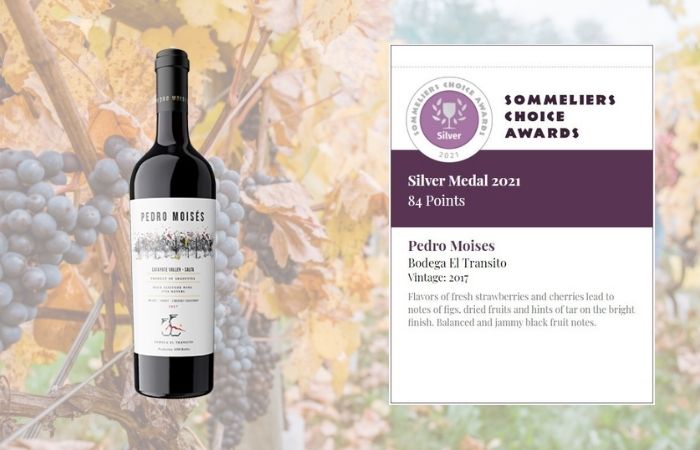 The goal of the Sommeliers Choice Awards is simple: to provide on-premise buyers and sommeliers a valuable benchmark for understanding which wines would make a compelling addition to a wine list.

According to CEO, Sid Patel of event organizer, Beverage Trade Network, “Idea of Sommeliers Choice Awards is to put the best judges forward to evaluate the best on-premise wines for the consumers. We were very pleased with the quality of the wines we received in the 3rd year of the competition”

Wines were judged on the basis of: Food Parability, Typicity, Quality, Value, and Packaging.

Similarly, wines that were assessed between 80 to 89 points were awarded a silver medal, and a bronze medal was awarded to those that scored between 70 to 79 points.

“We are extremely pleased that our wines performed so highly at the recent Sommeliers Choice Awards,” said Andres Nanni, from Bodega El Transito. “We are very happy to win another medal for our wines, as it confirms that we continue to delight consumers with our high-altitude wines.”

Bodega El Transito located in Cafayate, at over 6,000 feet above sea level, in the north-western province of Salta, produces high-altitude, globally-awarded wines.

The roots of the El Transito winemaking tradition stretch back to the end of the nineteenth century when the current owner's great grandfather, Pietro Marini, emigrated from Italy and settled in Cafayate.  The tradition has been handed down and is now in its fourth generation, in the very capable hands of vintner Andrés Nanni.

About the Sommeliers Choice Awards

The About Sommeliers Choice Awards looks to identify wines that would make a compelling addition to any wine list. The aim of the awards is simply to provide independent and honest reviews for brands that are looking to enter the U.S. on-premise wine market.

The organizers of the event are Beverage Trade Network, a leading online platform dedicated to connecting the global beverage industry. The BTN platform helps the beverage professionals connect with peers and understand the global business landscape, leading to the overall growth of the beverage industry.
Beverage Trade Network also hosts other events such as, IBWSS shows (London, Shanghai, and San Francisco), along with other events including USA Trade Tastings, London Competitions (Wine, Beer & Spirits), USA ratings (Beer & Spirits), and 14 other events around the world.